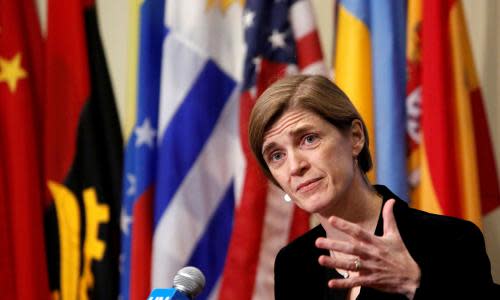 On Wednesday, Joe Biden chose her deep expertise in solving crisis all over the world, Samantha Power, the former US ambassador to the United Nations, to be the head of the American Agency for International Development (USAID).

"Nobody is better placed to ensure that our development agenda is a key pillar of our foreign policy," the US President-elect said in a video message.

Ambassador Samantha Power is a global voice of conscience and moral clarity that confronts and unites the international community to protect the dignity and morality of all people.

As USAID Administrator, she will be a good US interaction force.

Her nomination takes her straight to the center of democracy.

She fundamentally disagreed with Obama-decision Biden's to refrain from ordering military action in Syria.

Power said on Wednesday: "Our wellbeing is tied to the safety of people living abroad.

Many of the challenges we are facing in the US, such as the pandemic, the global crisis, climate effects, challenges to the rule of law, or even to democracy – questions in which people around the world are faced."

Biden also said he will lift the USID administrator to a seat on the National Security Council, headed by National Security Advisor Jake Sullivan, after Donald Trump has concentrated on slashing US assistance overseas.

"Power is going to bring together the international community and work with our partners on the major challenges of our time, including Covid-19, climate change, global poverty and democratic backwardness," said Biden's Transition Team in a statement.

"Ambassador Power, a crisis-tested civil servant and diplomat, has been a world leader in resolving the conflicts, responding to humanitarian emergencies, defending human dignity and strengthening the rule of law and democracy," she said.

She will put together the international community and collaborate with our allies to face the toughest issues of our time as a leading voice for human and primary American engagement around the world.

The longstanding human rights defender served as UN envoy to the former President Barack Obama and Biden from 2013 to 2017.

She won a Pulitzer Award for her book A Issue from Hell, a review of US inability to deter genocide, a former journalist.

Power covered the conflict as a freelance reporter in Bosnia in the 1990s.

Related: Samantha Power: 'To go too public and to have no jobs...

I've been a wanderer'

Power clashed badly with Obama over US military involvement in the Syria conflict, a stain that hangs over the Obama administration's legacy.

Power argued for action but ended up failing, with numerous former allies and peers accusing him of treason and hypocrisy.

The United States has given rebel groups minimal funding and preparation, but has not made a formal military involvement, even after Bashar al-Assad has crossed Obama's "red line" on chemical weapons, killing hundreds with a sarin gas attack at rebel suburbs in Damascus in 2013.

Power had written admirably in A Issue from Hell about the US negotiators, who resigned in the face of the Bosnian genocide in the face of US inaction.

She opted against it as her turn came to step back.

She thought that she could also produce results by consistently advocating that human rights be central to foreign policy.

In the meantime, Biden has selected Kurt Campbell to be his White House coordinator for the Indo-Pacific region, a veteran of the Obama administration, covering the relationship with China, said Biden's transition voice on Wednesday.

Campbell is known to be one of the architects of their administration's 'pivot to Asia' policy, a much-vaunted but still confined US capital rebalancing in the region, and he served under President Obama as Asia's top diplomat.