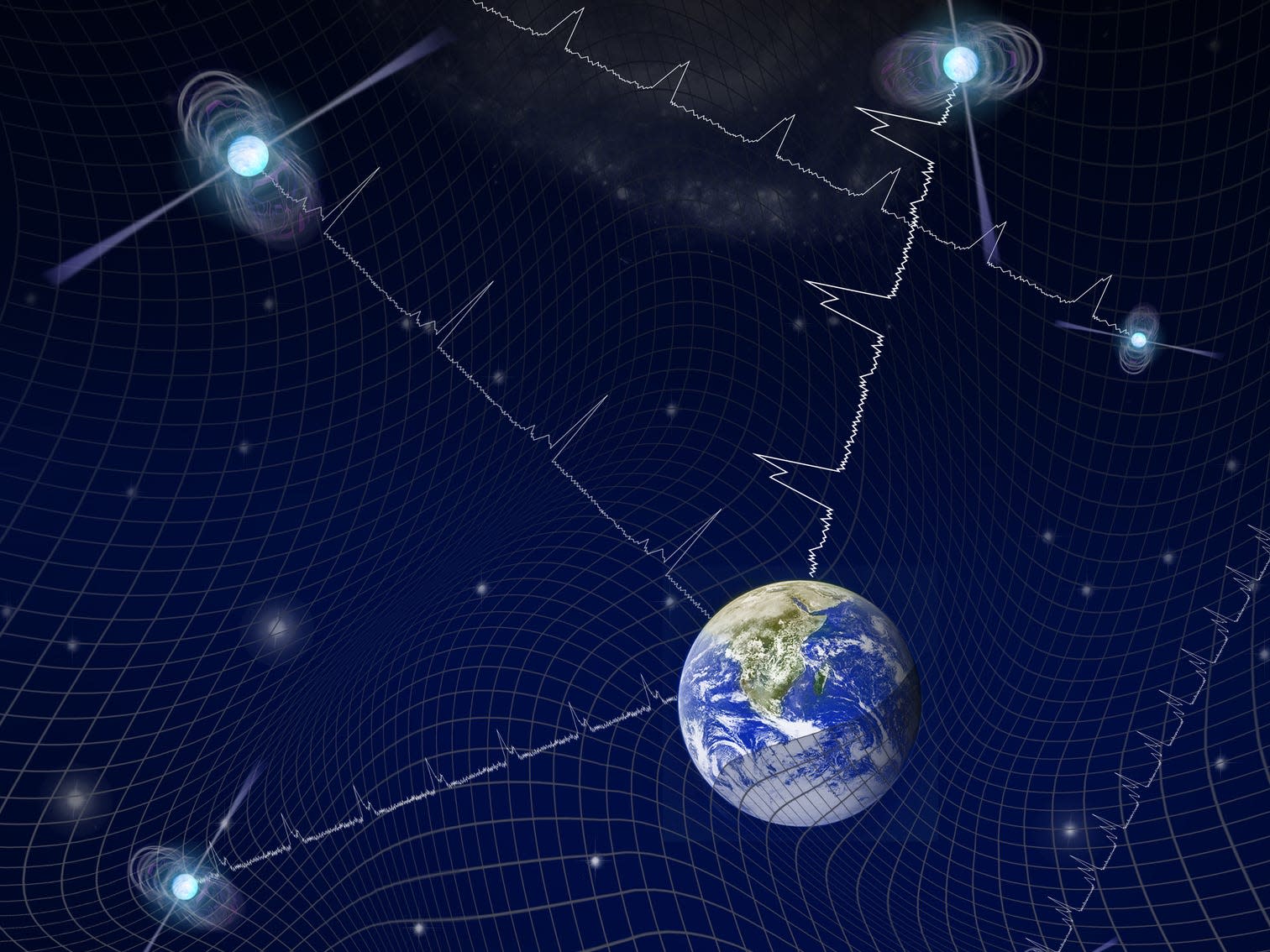 An artist's illustration of a supermassive black hole surrounded by a fluttering disk of material.

Scientists may have found the first signs of the gravitational wave: a sea of waves in the world in spatial time.

They were recently observed in violent encounters with neutron stars and black holes.

By observing dead stars in the entire galaxy, scientists have discovered a signal which can be a constant thrust of gravitational waves from far-off galaxies as super-massive black holes crash.

Scientists may be on the verge of finding a new phenomena in the whole cosmos: a relentless thrust of ribs in space time.

Albert Einstein predicted first that colliding large objects such as black holes would produce the so-called waves of gravity.

Yet he assumed that the sounds and movements on earth would preclude humans from ever detecting these waves.

Einstein was mistaken in that respect.

One of the most outstanding projects in history – the Gravitational Wave Observatory (LIGO) – first observed gravitational waves in 2015.

The waves originated from two black holes that collided over 1,3 billion light-years distant, sending rivers that gradually drifted across our world and detected in the Washington and Louisiana L-shaped detectors of LIGO.

Three physicists who worked to develop the experiment received a physics Nobel Prize.

Since the first observation, LIGO and its Italian twin Virgo have at least 50 times observed gravity waves from colliding black holes and neutron stars.

Yet these are the most noticeable cases of gravity waves - explosive nuclear outbreaks from some of the world's most massive collisions.

Theoretically, the heavens could also vibrate with a steady low-level buzz of gravitational waves from fusion of galaxies across the world.

In an image taken by the Hubble Space Telescope, two spiral galaxies collide.

Scientists assume that in the middle of a large galaxy there is a supermassive black hole that is millions or perhaps billions of times more massive than the collision structures observed by LIGO and Virgo.

These supermassive black holes can be merged as galaxies collide and become one slowly.

The theory of this behavior in the universe is called the gravity-wave history or GWB.

But no one has yet found conclusive proof of it.

This is where modern science enters.

The first signals of this background radiation in time could be observed by astrophysicists in the North American Nanohertz Observatory for Gravitational Waves (NANOGrav).

They published their research in The Astrophysical Journal Letters.

Julie Comerford, a NANOGrav team astrophysicist and an assistant professor at the University of Colorado Boulder said in a press release that this tempting first suggestion of a gravitational-wave context suggests that supermassified black holes are likely to converge into one sea with gravitational waves that rip from supermass black hole mergers in galaxys around the globe.

A wave of gravity observatory the size of our galaxies

The representation of signals from pulsars to the earth by an artist.

The NANOGrav researchers attempted to mimic LIGO on a much larger scale to locate the history of the gravitational wave.

LIGO operates by screening and separating a laser beam into two.

The light then goes down two 2.5-mile-long arms of the detector.

At the end of those arms, the beams bounce off mirrors and overlap near the beam shift, where they can balance one another out.

But as a gravitational wave moves in, space-time warps – leaving one tube a little longer and the other short.

The two beams then return to the splitter at varying intervals, resulting in light bursts.

However, it uses millisecond pulsars instead of mirrors: incredibly dense dead stars that rotate quickly, delivering an eruption of light to Earth every millisecond.

Their exact timekeeping contrast with a nuclear clock, because these celestial objects are suitable for space time shifts.

Much as LIGO investigators track gravitational waves by calculating changes in light beam arrival times, NANOGrav researchers do this by measuring differences in light arrival time from pulsars around the galaxy.

Through gravitational waves traveling through the universe, they squeeze or extend the distance to the planet, increasing the time of their arrival by just a few hundred nanoseconds.

"We actually create a galaxy-sized gravitational wave detector within our own Milky Way," said Joseph Simon, a University of Colorado Astrophysicist in Boulder and the lead author of the latest paper at the American Astronomical Society meeting at a press conference.

This approach is referred to as a "pulsar timing array."

Since the distance between Earth and one of these pulsars is much greater than the length of the arms of LIGO, NANOGrav could detect low-frequency gravitational waves from distant fusions of supermount objects.

In comparison to the fleeting outbreaks detected by LIGO, these low frequency waves could continue to travel through the Earth for years or even decades at a time.

By merely tracking the pulsars for a collective, concurrent alteration in time, physicists may be able to recognize the moment that a gravitational wave appears in our neighbourhood or leaves.

NANOGrav used the Green Bank Telescope of the National Science Foundation in West Virginia and the Arecibo Observatory in Puerto Rico in watching pulsars in this direction.

The Puerto Rico Arecibo Observatory until its fall.

But in December, after two big cable splits, the Arecibo telescope failed.

Its 900-ton platform failed and broke its panels without prospect of recovery.

Before the first cable loss in August, the researchers used Arecibo.

Paul Demorest, a NANOGrav scientist based at the United States National Radio Astronomy Observatory, said at the AAS meeting "This is, of course, a major loss for our project,"

An aerial view reveals the damage caused by a significant cable outage at the Arecibo Observatory in Puerto Rico 1 December 2020.

NANOGrav researchers noticed a coincidental change in pulsar light timing in the study of data from a total of 45 pulsars, each detected for at least three years.

You assume this could be the background of the gravity wave.

"We walked through each of the pulsars one by one. I think we were all expecting to find a few that were the screwy ones throwing off our data," said Simon during the announcement.

"But then we got through them all, and we said, 'Oh my God, there's actually something here.'"

At lower frequencies, the pulse is higher, which is what the scientists hope to find in gravitational wave rings.

But to fully uncover the current phenomena, they need to examine more evidence, some of which they have already gathered, to ensure that the trend is through datasets.

"We have this really significant evidence for a common signal. However, we can't quite say what it is yet," said Simon.

NANOGrav is now working on two pulsar time array projects in Europe and Australia to see if their data contained identical signals.

Demorest claims the NANOGrav may provide definite proof that it is the background of the gravitational wave next year.

However, Simon said it probably would take longer to evaluate the results.

NANOGrav will not only evaluate new data but will also extend its spectrum to include more pulsars and use sensitive telescopes - which have never been developed yet.

Finally, the scientists expect to locate and research the supermassive black hole that send gravitational ribs.

"Being able to detect the gravitational-wave background will be a huge step but that's really only step one," said Simon.

"Step two is pinpointing what causes those waves and discovering what they can tell us about the universe."